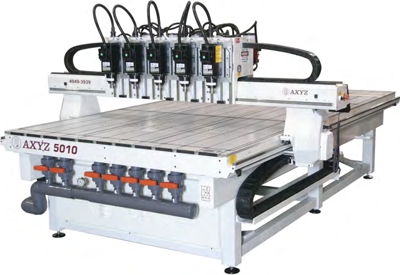 A winning combination of increased productivity and commensurate profitability is now available through the high-performance multi-head CNC routers supplied by AXYZ International. One of the greatest known strengths of AXYZ routers that tends to set them apart from other machines is the ability to provide customised cutting head configurations to accommodate virtually every conceivable manufacturing requirement.

A typical example is the AXYZ 5010 router shown. This incorporates five identical cutting spindles mounted on a single carriage to allow the simultaneous processing of five individual components. The result is a significant increase in production capacity and to a correspondingly higher profit capability for companies using this type of router.

Multi-head AXYZ routers can incorporate one or two carriages, each of which could feature up to three individual cutting heads mounted on independently-controlled Z axes driven by precision ball screws. To further enhance this capability, the routers can also incorporate two gantries, each with its own set of carriages and cutting heads.

When multiple spindles are mounted on the same carriage they can operate together (as in the five-head example shown) to allow the simultaneous processing of a number of different components to enable optimum production to be achieved via a single machine. Alternatively, each head could be fitted with different tooling devices (for example, routing spindles, knife units and drills) and configured to cut independently of the other heads to enable jobs requiring multiple tooling to be carried out without the need for an automatic tool change facility.

The manufacturing options available with these multi-head routers are virtually endless and will dramatically improve the production capacity and profitability for all AXYZ customers.