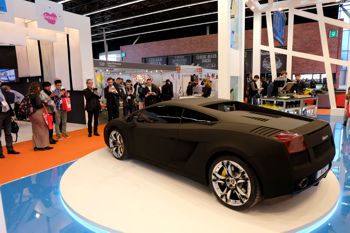 With its new launches, APA conquered visitors at FESPA, says the company.

Manufacturing self-adhesive films for over thirty years and an 'international leader in the field of commercial advertising, APA unveiled its exclusive new products for 2016 in a stand with an innovative and futuristic look'.
The texture of the velvet-like Ultra Matt, and the just-launched Jaguar, used to wrap a brand new Lamborghini on display, drew the curious gazes of visitors to the event, says APA.

Visitors got to see the 'intense' new colours of the Candy Colour and Chrome series. It was also possible to try out the innovative, channelled, repositionable 'RepoTack Air Free System' adhesive, which is 'easy to and guarantees safe removal, leaving no traces'.
They used FESPA 2016 to launch 'gli UNICI – one of a kind – by APA', a selection of top-quality wrapping film, 'unique to their kind, and presented in a new and attractive cover'.

New products of the APA Digital Print line were also presented: film of high technological content, which is printable with all types of graphics; the new heat-sealable film for fabrics; and two exclusive series, Creative and Cover, the latest generation of film for the interior decoration sector.