In this feature we uncover exactly what RIP software is, and the benefits of using it in managing your workload. We speak to the experts about what makes RIP worth a second look as a viable investment opportunity.

Roger Ward, Managing Director of AIT Shiraz Ltd, writes on the basic principles of RIP...Monty Python?! And outlining what actually makes the software 'tick' for your business. 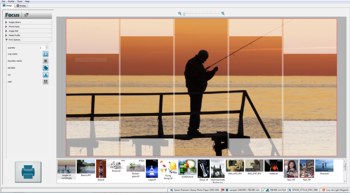 Nowadays all printers ship with a software driver but most with a RIP of some description. A RIP, or Raster Image Processor, is a piece of software that is almost as essential as the printer itself and is the key to producing the prints you require.

And yet, as it is something that ships with the printer and is therefore essentially free, it is often undervalued - often perceived to have no value at all. And yet, it ironically contains as much technology as the printer itself!

So why do you need a RIP?

First of all, let's consider the most basic of setups, a photographer with one camera and one printer who wants to print his images onto one type of paper at sizes no bigger than the printer itself. I know a few such situations and provided their work doesn't get more adventurous then they will just about get by with the printer driver, full stop.

But for most sign makers their life is a lot more complicated. They obtain images from a variety of sources and output them onto a dazzling array of substrates, some images need to larger than the print width of the printer, they may have several printers and to top it all they need to reproduce corporate colours across all their prints.

Set this task to someone with just a printer driver and no RIP and any practitioner will tell you it is impossible. In fact, whether you are a large corporation with multiple operators and printers or just a one man band with one computer and one printer, a RIP is an essential tool if you intend to take files from more than one source and output onto more than one substrate. 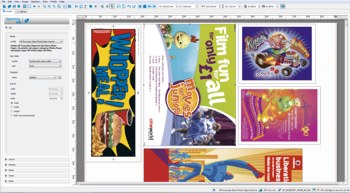 So what does a RIP do? Well, it has 5 essential functions:

A sign maker may receive files from his customers in a number of different file types or languages and need to output these to a printer which again uses another language.

There are also a number of operations that need to be performed on this data before it is sent to the printer, so the role of the Interpreter is to translate or convert the input file data into a format that the software can then understand, and it needs to able to do this very quickly. This is a very specialist piece of programming, indeed it is so clever that there are few people on the planet that can understand and compose it, so it is not difficult to realise that the interpreter is often licensed by RIP developers from a handful of companies that focus on creating these algorithms or programming masterpieces.

Once we have the data in a format we can understand we need to manipulate the colours or channels to the required levels. For instance, the input file may describe a particular colour as levels of red, blue and green, which is a good choice as these are the basic colours which our retina can detect and our brain perceives as colour.

However, to output the image we need to convert these channels into subtractive colours, cyan, magenta, yellow and black (or any other number of colours according to the printer and its print head ink colours).

This in itself isn't a difficult task but it's made more complicated because the inks on the printer aren't necessarily pure mixtures - you only have to wander around an exhibition to notice that some printer's yellow inks are anything from shockingly bright to beautifully golden. Plus there is the added complication of how a dot of ink will behave when it strikes the media.

It will be absorbed and expand in the process and this dot gain, as it is called, needs to be controlled. And so there is a limit as to how accurately you can reproduce a certain colour, and the trick is to get it as accurate as possible within a given range of colours or gamut.

Thanks to the proliferation of desk top printers, basic colour management software is now embedded into the operating system of most computers, but large format printing is more sophisticated and needs additional tools. 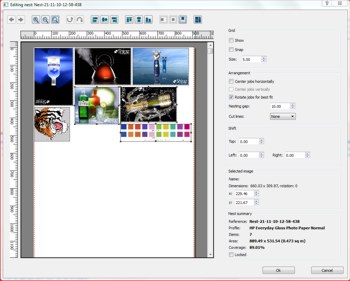 Traditional screen printing uses halftones with equally spaced dots; the intensity of the colour is controlled by the size of the dot.

Although a digital printer can mimic this type of screen by effectively building a halftone dot with several much smaller digital dots, it is not constrained by a fixed resolution mesh; the dots can be placed in variable positions. Early implementations of this technique called stochastic screening, whilst capable of producing higher resolution images could introduce rivers of lines running across theprint like interference patterns.

The trick is to disperse the value of some dots to its neighbours, to introduce a certain randomness so that these unwanted patterns are dispersed. This technique called error diffusion creates the illusion of flat colour and sharper text on a page. Only close examination reveals the art of this technology, for that is what it is. There are other types of screen which better lend themselves to different technologies, for instance with textiles, but screening is a key element and worthy of its own mention.

This aspect of the RIP takes on greater importance relative to the size of the installation in terms of the number of printers and the number of operators.

Take the simplest installation with one computer and one printer, it is not a particularly difficult task for one operator to organise his printing tasks, but add another printer or operator and the day's production begins to require some management and this is where we introduce the concept of queues.

A queue could contain a list of jobs that need to be output on a solvent printer loaded with banner material. Some may have higher priority than others. So different operators can design and submit jobs to the queue and the jobs get printed when the relevant machine with the required media becomes available and in the correct order according to urgency.

Another important aspect of workflow is layout and tiling. With layout the operator is able to make best use of the available media, visually checking that different jobs fit neatly onto a given page.

It is probably worth mentioning hardware at this point. The operator works at a computer called a client. Jobs are submitted to the server which drives the printer over a connection called the network. With simple installations the client and server can be on the one and same computer.

But as installations grow the clients are linked to at least one server, if not several, which in turn process the jobs and send them to the printers. Of course, you need to check whether your choice of RIP can support client/server operation as not all can. 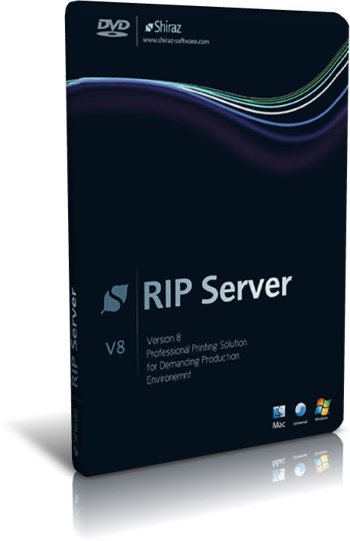 The last piece in this jigsaw of functions is the printer driver. This takes the data from the RIP in its internal format and converts it into packages of data that the printer can understand.

It's important that the machine is not starved of data so that it pauses but at the same time sent in a controlled manner so that it is not lost in translation, so to speak.

The driver also reads information from the printer and sends it back to the RIP, the type of printer, the levels of ink, media loaded etc.

The sophistication of the driver is defined by the functions offered by the printer.

...and last but not least - Support

When you start up a new digital printing business, it's good to know that there's someone at the end of the phone, or remotely connected to your PC, that can help out when jobs aren't straightforward.

But once you become proficient at handling tasks is ongoing support such an issue? The simple answer is "Yes". The big advantage of modern technology, which ironically many perceive as adisadvantage, is that it is constantly changing, being improved and being revised.

In particular the language of file formats is being updated, new descriptions being added to the language to better describe certain aspects of images, like transparencies and graduations. And, believe it or not, the RIP also needs to be updated to address these changes to the language.

With digital file formats, digital printers, computers and operating systems, we are dealing with a moving target, an ever changing environment and it is important therefore to move with the times.

When customers ask me why they need a RIP I often think of the Monty Python sketch "What have the Romans ever done for us?" which is followed by a list of the fundamental achievements of modern civilisation. "Well", I start, "apart from fact that most of your work will arrive in a variety of different formats, you will need to output with consistent colours onto a range of different media, that you expect quality of output that is sharp and easily legible, that you will need to tile and organise work in a sensible manner, to output to one, if not more printers, to stay up to date with an ever changing technology, to minimise the costs of waste material, to make a profit and finally to endeavour to go home at night and enjoy a decent night's sleep - then indeed, apart from all that... Why do you need a RIP?"

Roger Ward is the managing director of Kent-based AIT Shiraz Ltd, as supplier of systems, consumables and services to the sign industry. He is also a director and founding member of Shiraz Software, the RIP development company, based in London.