The science behind the "hot spot" 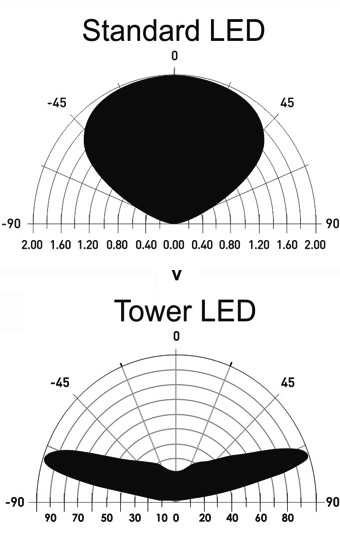 Photometric: The shaded area represents the angle and "brightness strength".

"0" represents the "Hot Spot". Tower LED modules are unique by firing light to the sides, which reflects off the side walls creating uniform bright illumination.

Lighting built up letters can make a significant difference to the overall effect, even make or break a project. One company has addressed one common problem with an innovative solution that makes sure there are no more 'hot spots'!

Khalid Bashir from 3D Sign Systems explains: "How many times have you seen a high quality sign installation but the only factor that makes the sign not so great is the 'hot spots' of light. The traditional method would be to use neon, but this 'art' has been in decline for a number of years for many reasons such as the rising cost of energy. And for many, the newcomer namely LED modules, have been struggling to fill this void satisfactorily. Illuminating small or shallow depth channel letters has been quite difficult and frustrating using standard LEDs. And for this reason many a good sign maker succumbs to compromise. In order to achieve adequate brightness, typically bright LEDs are used, which can create the dreaded hot spots. This is where the sign letter is not uniformly lit but suffers from dimly, and brightly, lit areas. To overcome this problem with hot spots, lesser powerful LEDs can be used, but the quantity of modules tends to increase proportionately, which increases production costs.

"So 3D Sign Systems can offer a product that offers 'hot spot' free illumination and superb levels of brightness with our very unique Tower LED modules. The Tower module uses a very specialised dome lens which reduces the amount of front firing light to the face of the letter, And instead the majority of the light emitted is fired sideways at a much shallower angle. This strong low angle light bounces of the channel sides to produce bright, uniform levels of front face or halo illumination. The end result is a quite impressive even on letters with 40mm depth. The Tower module is equally good on letters with up to 200mm deep channels.

"Unsurprisingly there are quite a high number of signs that deem a retrofit illumination upgrade and the potential to increase revenue in this market is quite high."